This is the journal of author and engineer Karl Gallagher.

My novel Torchship is now available on Amazon, both ebook and paper. The audiobook edition will be available in March 2016.

A captain who’ll take any job if there’s enough money in it.

A pilot with an agenda of her own.

And a mechanic with an eye on the pilot.

The crew of the Fives Full are just trying to make enough money to keep themselves in the black while avoiding the attention of a government so paranoid it’s repealed Moore’s Law. They’re not looking for adventure in the stars . . . but they’re not going to back down just because something got in their way. 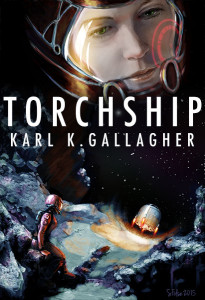 Requirements Kill: How projects can be ruined by the sheer number of requirements on them.

Feeds, Seeds, and Gray Goo: Nanotechnological manufacturing will be driven by logistics--and that's what keeps the "gray goo" scenario from being a real danger.

Other engineering essays:
The issues with engineering as a career, the problems with engineering education, and how to become an engineer if you just can't resist it. The reasons to avoid government projects. Don't be this kind of whistleblower. Why licensing software engineers is a bad idea. Even in fiction it's hard to keep ahead of advancing technology.

Medical doctrine: I have issues with the childhood vaccination schedule and the innumeracy of medical researchers. They're not all bad though.

I've written a few pieces of fanfic and a whole bunch of book reviews.

Playing MMOs has gotten me thinking about how we could use one to test changes to our real world and what would be the signs that we're actually living in a simulation.

I've written a few things specifically about World of Warcraft. A rant on the brainpower needed for tanks to taunt mobs. A missing piece of backstory on the Defias. A suggestion for monetizing add-ons within the Blizzard rules. Reflections on how much more the Horde storyline focuses on PvP. And a discussion of how the Iliad would look in WoW terms.

My opinions on war and politics have been given a blog of their own.

I enjoyed watching Falcon and the Winter Soldier. I'm tempted to gripe about the silliness of the nominal plot, which alluded to the pain of the Blip without engaging with some of the horrors which must have happened. But that's like critiquing a romance novel about a sultry biology PhD candidate and billionaire real estate developer because it screwed up the details of frog habitat and financing shopping malls.

Sam does his "I'm not worthy" routine, leaving the Shield vulnerable to the first cad to come along.
Walker picks her up. Sam sees the relationship and worries, but doesn't take action until Walker actually beats her bloody. Then Sam rescues the Shield, brings her home, and builds a relationship.

The climax of the story is making it officially permanent. Not a wedding--but there is a name change.
And they all live Happily Ever After. (Until next season.)

Facebook just nuked the notes feature, which I'd used for long items such as con reports. There's an obnoxious workaround that lets you access them if you dig deep enough (activity log, filter, scroll way down to notes).

I'm going to dump them all here to retain them. ( Collapse ) 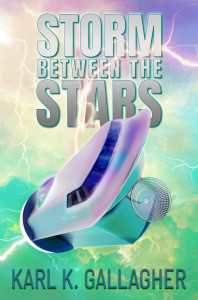 Braving the dangers of hyperspace, they reunited their world with the rest of humanity . . . and found even more danger.

Storm Between the Stars is just out on Amazon as paperback and ebook. It's the first book in a new space opera series, The Fall of the Censor.

Saw a meme about how one feels about having particular pronouns used on one.
( Collapse )

It's been a long time since I've done a meme on DW/LJ. Hence, the Quarantine Meme.


1. Are you an Essential Worker?

Yep. National Security is Essential, so as a worker at a defense plant I have to keep plugging. Fortunately I do paperwork which can be done from home so I haven't set foot at the factory since the boss said "go home."

1a. Are you in a vulnerable category?

Yep. Though less so than the other adults in the family.
( Collapse )

A handful of SF fans have been blogging about rediscovering the pulps. They're reading Burroughs and Howard with fascination and demanding, "Why didn't anyone every TELL me about this? Why is science fiction described as 'Men with Screwdrivers' instead of these amazing stories?"

In true modern fashion, they've developed a conspiracy theory to answer their question: John W. Campbell led a cabal to suppress the pulps to elevate literary effeteness above the masculine virtues of Conan, Tarzan, etc.

This is bullshit. Campbell didn't kill the pulps. They were destroyed by something else that happened at the same time Campbell took over Astounding: World War Two.

The war took millions of readers away from their pulp collections and sent them overseas to fight the war. When they came home Conan eviscerating a zealot wasn't exotic and thrilling. It was a reminder of when their buddy's belly was opened by a German shell or Japanese bayonet.

While at the war they discovered the greatest warrior didn't have as much of an impact on victory as a radar operator.

Combine that with soldiers dropping from the sky, artificial harbors at Normandy, encryption becoming "Magic," rockets flying across the North Sea, and all the other inventions that made the GI a small part of "combined arms" and readers weren't looking for hand-to-hand action. They wanted to know what the next totally unexpected superweapon would be. They were still shocked that a single A-bomb could destroy an entire city. They wanted to know if nuclear war could be avoided.

John W. Campbell's magazine offered the answers they wanted, in fiction form. Heinlein, Clarke, Asimov, and many others wrote about how to avert nuclear war and what new technologies might be out there. That's what readers wanted.

21st-Century readers are leading safe lives without fear of world war or atomic destruction. They're "Too wonder-stale to wonder at each new miracle." So many prefer 1930s pulp to 1940s hard SF. Unsurprising. And not worth demonizing John W. Campbell over.

I'm a fan of Robert Heinlein. No shock to anyone who's been reading me for a while. One of the hazards of being a Heinlein fan is watching the movies made of his works. Puppet Masters could have been a lot worse. Starship Troopers I've actively avoided--the reviews make me worry I'd blow multiple blood vessels watching it. So I was hopeful but wary when I heard a movie was being made of "All You Zombies." EDIT: A movie called "Predestination." I should include titles in my movie reviews . . .

It vanished from the theaters before I made up my mind to see it, but a friend loaned me the DVD recently. This past weekend I finally watched it.

1. Do sales tax forms on time. Check.
2. Write 10,000 words. Seven thousand. Plus most of another thousand in scrapped additional scenes for a short and a political post.
3. Ping my blurb writers. No. I'm terrible at marketing and publicity.
4. Not nag my editor/narrator. "Moderate" and "Better than I expected" she says.

Other things accomplished: I did the rewrite of "Silicon Valley Riot" and sent it off to a paying market. The other shorts sitting around were also submitted, so everything is in submission except the ones I wrote for the class back in 1989. I should take a look at those.

TLW/TWR are making progress. I'm just not on the critical path currently.

The space opera novel looks like it's going to come out around 60k, which is enough to sell as a stand-alone I think. This will be reevaluated depending on how TLW/TWR sell at that size.

I'll be on several panels at ConDFW. I took myself off the Dr Who panel as I'm several seasons behind on the show.

I'm delighted to announce that the Torchship Trilogy is a finalist for this year's Prometheus Award for best libertarian novel of the year. Past recipients include Neal Stephenson, Poul Anderson, Larry Niven, and Vernor Vinge.

To celebrate, I've put out an omnibus edition including Torchship, Torchship Pilot, and Torchship Captain. It's on a countdown sale starting at $0.99. Yes, that's fifteen dollars worth of books for a buck.

My congratulations to the other nominees. I enjoyed Andy Weir's Artemis almost as much as The Martian. Darkship Revenge is another excellent installment in Sarah Hoyt's Darkship series. Travis Corcoran's Powers of the Earth is a great tale of lunar revolution which hits all my buttons. I'll be checking out Ken MacLeod's Emergence and Casey & Hunt's Drug Lord as soon as I can.

And if you don't want to gamble a buck on the whole Torchship Trilogy, the first Torchship novel is free this week.
Collapse